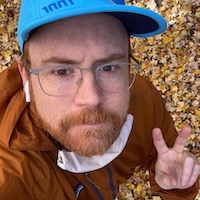 Michael Lahey is an Associate Professor and the Coordinator of Interactive Design at Kennesaw State University. He teaches classes on interaction design, how ethnography relates to design practice, critical thinking, and digital culture.

He writes mostly about design education these days from a perspective informed by cultural studies, ethnography, and STS. He wrote a dissertation about the concept of control as it relates to how television companies designed companies designed experiences with audiences on digital platforms in the 2000s. Here's his cv﻿.

He seeks inspiration/wastes time on tumblr and hosts some photos there as well. He also makes music mixes to fill time in Atlanta traffic and keep tracks of his non-work-related reading.
‍
Some things he's into include: artichokes, being an out-of-touch musical omnivore, checks & balances, composting, delta waves, doodling, Finland, modern art (to a point), NBA basketball (the 2003-2004 Pistons, 2013-2014 Spurs, and 2014-2015 Hawks are some of his favorites), Nordic design, the NY Mets, owning less, running, and space ice cream.

If you ever get the feeling, drop him a line at mlahey (at) kennesaw (dot) edu!